Truro Fencing Club runs beginner courses for both children and adults (separately) throughout the academic year.

This page takes you through the many benefits of fencing, the three weapons and includes details of our current courses for you to join. Please feel free to explore the website and if you have any further questions, queries or concerns at all, please don’t hesitate to get in touch with us directly.

Truro Fencing Club’s 7-session Beginners’ Courses run on Wednesday evenings for children, and Thursday evenings for adults. All courses take place at the Cornwall Fencing Centre. The 7-session course costs £49. On completion of the course you will be entitled to the 3-month Beginner membership at £20 / month. This begins in the first full month following completion of the course.

NB: no sessions during half term or on bank holidays.

The Olympic sport of fencing provides a well-rounded form of mental and physical exercise essential for total health and wellness.

When practiced by children during their developing years, martial arts such as fencing have been shown to increase executive function including focus, suppression of impulsive reactions, and mental manipulation of ideas. 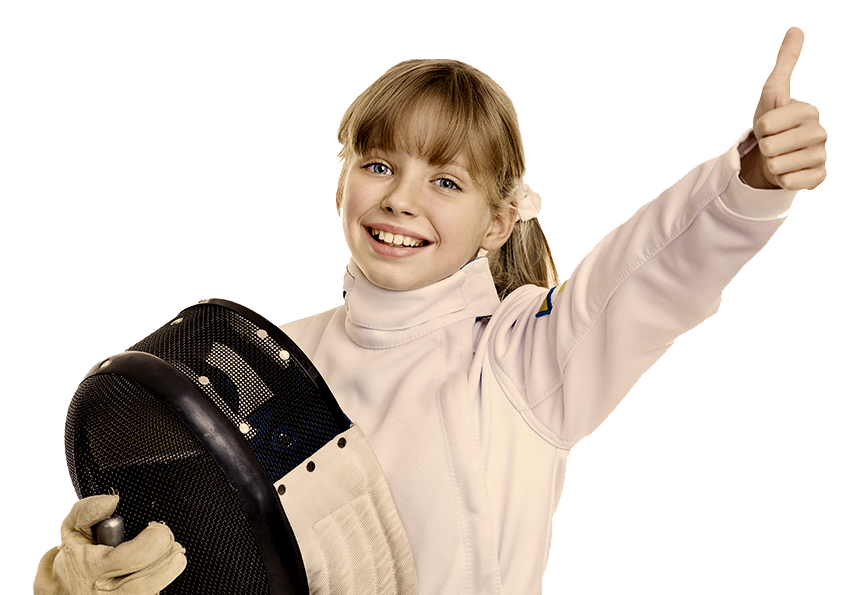 It is a fast-paced sport and a great way to burn calories and stay in shape generally; for example, fencers have been shown to have significantly increased bone and muscle mass compared with controls, which help prevent injury and osteoporosis.

Fencing – despite appearances – is also an exceptionally safe sport, with fencers suffering fewer injuries than athletes in most other Olympic Sports including swimming, table tennis, and curling.

Being a member of Truro Fencing Club offers you the opportunity to experience what can be a lifetime sport.

School-age children, teenagers and college students fence at local clubs and at their schools and universities, while adults from their twenties into their seventies can be found on fencing pistes around the country, exercising their minds and bodies – and winning medals for the club!

There will be no more than 12 fencers on each course of mixed gender groups.  All equipment is provided and included in the course fee.  Places are allocated on a first come first served basis and fencers may pay in advance, to secure their place with a completed enrolment form.

NEXT STEPS:
JOIN: Truro Fencing Club FB Group, for updates and announcements as they are released.
COMPLETE: an enrolment form at the bottom of this page for you or your fencer to be added to the WAITLIST for the next course and receive a priority notice – you will be contacted first to pay in advance to secure the place on the course.

Adult fencers (15+) may also consider the 1-2-1 courses below, specifically designed for fencers who have some previous experience.
Please email TFC Coach Balazs Kurucz kuruczbazsi@gmail.com is you would like to book any of the 1-2-1 courses.

NEXT STEPS:
JOIN: Truro Fencing Club FB Group, for updates and announcements as they are released.
COMPLETE: an enrolment form at the bottom of this page for you or your fencer to be added to the WAITLIST for the next course and receive a priority notice – you will be contacted first to pay in advance to secure the place on the course.

To secure yours or your fencer’s place:​

Please complete the online enrolment form (below) and process the course fee of £49 using the payment reference relevant to your chosen course.  TFC bank details are:

Please email Joanne directly admin@trurofencing.com with any questions, queries or concerns you may have. 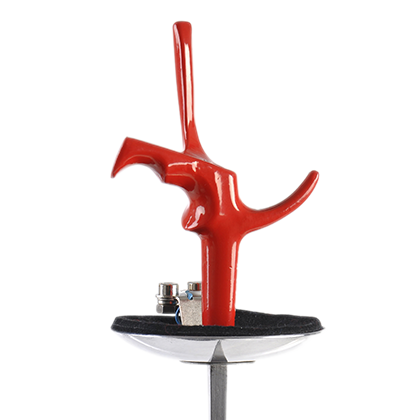 The foil has a flexible rectangular blade, approximately 35 inches in length, weighing less than one pound. Points are scored with the tip of the blade and must land within the torso of the body. The valid target area in foil is the torso, from the shoulders to the groin, front and back. It does not include the arms, neck, head and legs.

The foil fencer’s uniform includes a metallic vest (called a lamé) which covers the valid target area, so that a valid touch will register on the scoring machine. A small, spring-loaded tip is attached to the point of the foil and is connected to a wire inside the blade. The fencer wears a body cord inside his uniform which connects the foil to a reel wire, connected to the scoring machine.

There are two scoring lights on the machine. One shows a green light when a fencer is hit, and one shows a red light when her opponent is hit. A touch landing outside the valid target area (that which is not covered by the lamé) is indicated by a white light. These “off target” hits do not count in the scoring, but they do stop the fencing action temporarily. 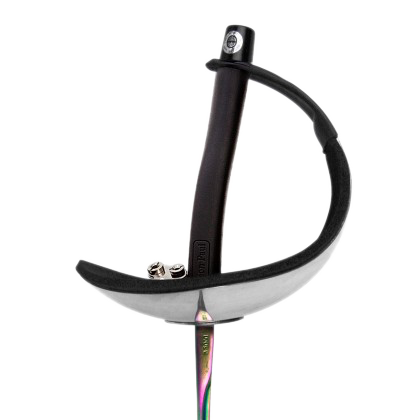 The sabre is the modern version of the slashing cavalry sword, and is similar in length and weight to the foil. The major difference is that the sabre is a thrusting weapon as well as a cutting weapon (use of the blade). The target area is from the bend of the hips (both front and back), to the top of the head, simulating the cavalry rider on a horse.

The sabre fencer’s uniform includes a metallic jacket (lamé), which covers the target area to register a valid touch on the scoring machine. The mask is different from foil and épée, with a metallic covering since the head is valid target area. 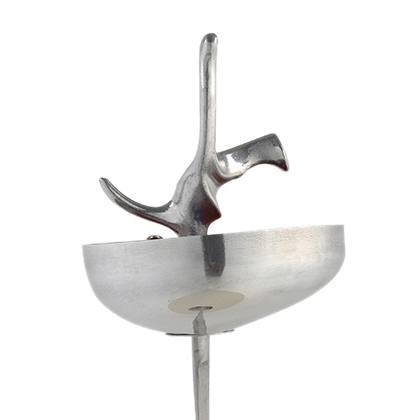 The épée (pronounced “EPP-pay”), the descendant of the dueling sword, is similar in length to the foil, but is heavier, weighing approximately 27 ounces, with a larger guard (to protect the hand from a valid hit) and a much stiffer blade. Touches are scored only with the point of the blade. The entire body is the valid target area. Épée does not use the right-of-way in keeping with its dueling origin – he who first gains the touch earns the point. Or, if both fencers hit within 1/25th of a second of each other, both earn a point. However, it is equally important to have a sound defence for épée, since the entire body must be protected from a touch.

The blade is wired with a spring-loaded tip at the end that completes an electrical circuit when it is depressed beyond a pressure of 750 grams. This causes the coloured bulb on the scoring machine to light. Because the entire body is a valid target area, the épée fencer’s uniform does not include a lamé.